skip to main | skip to sidebar

Is it Kosher to hang around with Madonna? 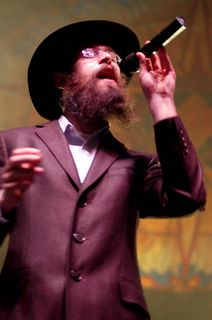 Want to understand what happens when a secular Jew from Brooklyn gets on stage to play a combination of reggae and rap? Listen to Matusyahu's "Live at Stubbs".
This guy definitely understood the meaning of rythm.
The "strangest thing to climb the billboard chart this year", Matisyahu is a great demonstration of the power of culture fusion.
And yes, Madonna wants to invite him over (according to Rolling Stone magazine) but he remains suspicious......
Love it.
Hey Rolling Stone magazine, I "borrowed" the picture from your web site, I hope it's ok.....
Publié par Gricha Safarian

How many of you??