skip to main | skip to sidebar

Shut up Sigmund Freud (this is about music...) 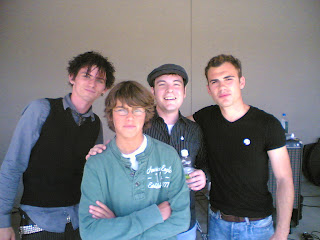 The other day, outside a Guitar Center near San Diego, I watched a band playing in front of a (very) limited audience and was quickly drawned into their energetic music.
Band name is "Shut Up Sigmund Freud", these three musicians have something and I guess we'll hear about them in the near future.
Guy on the left sings and plays guitar, the guy with the hat is a bass player obviously enjoying life and the guy on the right is an incredible drummer, apparently from Italy if I understood well.
The guy in front is not part of the band, though he is also a very good drummer at age 12.....
The music of Shut Up Sigmund Freud (SUSF??) is a nice mix of little bit of Rolling Stones with some Stray Cats to it and a zeste of Clash.
Their music is available here and I specially like "the Runaway" (listen to the drum) and "Darwin Award".
Good luck guys, you are going to make it, I'm sure.
Publié par Gricha Safarian

How many of you??